In the last 50 years, 60% of the world’s reptiles, mammals, birds and fish have gone extinct. That’s a very depressing thought. We are losing animals at such a rapid rate, that it can be overwhelming. Most people feel like they are powerless to help, that the planet and all the animals who call it home are doomed.

Conservation moves at a glacial pace. Traditionally, each species facing extinction must be studied to see why numbers are dwindling. Then habitat must be restored, natural food sources replenished, and predators effectively controlled. In many cases, the species in question is wiped out long before this process can be completed. Of course, there are reasons for this hands-off approach. In the past, attempts at restoring an eco-system through introducing foreign species or other forms of human meddling have been disastrous.

The hands-off approach is the most sensible, but we just don’t have time for sensible. The truth is, there isn’t an eco-system in the world that isn’t constantly being affected by human activity. Pollution, habitat destruction and climate change affect all animals and one man is throwing caution to the wind.

Professor Carl Jones is the chief scientist at Durrell Wildlife Conservation Trust in Mauritius. Professor Jones has saved more species from extinction than anyone else, using methodology that is frowned upon by the scientific community. To put it plainly, Professor Jones interferes.

He feeds the parent birds and removes the eggs from the nest when they lay. This is a method called double clutching—removal of the eggs can spur the parents to lay a second clutch. “By stealing those eggs and putting them in incubators, I could get them to lay second clutches,” Jones explains. “When I’d hatched eggs in captivity, I put some of the youngsters back in the wild and I fed the wild parents so they could look after them.”

Jones not only fed the birds, hatched eggs in incubators and raised birds by hand, he would also tackled predators that threatened the species. Mongoose had been introduced to the island to eradicate rats but were now raiding the nests of native bird species. Jones created nesting boxes that were mongoose proof and made every effort to kill these predators when he came upon them in the wild, sometimes with his bare hands.

The results speak for themselves. There were only four Mauritius kestrels left, and now there are 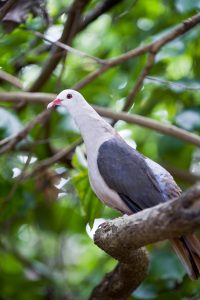 hundreds. From less than a dozen, there are over 400 pink pigeons thanks to Professor Jones’ efforts. The echo parakeet had dwindled to single figures, but now boasts a flock of 750. There were less than a dozen Rodrigues fodies and Rodrigues warblers, but they number 14,000 and 20,000 respectively.

Some conservationists may still find these methods dangerous, but it may well be time for some unconventional action if we are going to stem the flow of species that are going extinct. Many scientists agree and, in 2016, Professor Jones was recognized for the extraordinary contribution he has made to conservation by being awarded the prestigious Indianapolis Prize.

We are losing species by the minute through our actions, so it makes sense that we need to take action to save them. Let’s hope Professor Jones’ work inspires other conservationists and citizens to get off the sidelines and start saving animals.