British artist Mishak Henner’s latest exhibit give visual clarification of the extent to which feedlots and factory farming are destroying the environment. Antibiotics fed to cows and pigs are ruining the water supply and rendering aquatic life impotent and the gas of feedlot animals adds 14% of greenhouse gases much of which is methane. Methane is 23 times more powerful than carbon monoxide and cows are also responsible for two thirds of ammonia in the atmosphere.

Now aerial photographs sourced by Henner from satellites reveal a macabre scene of pollution and waste in Texan factory farming feedlots. In an interview with Fact Co Henner said the following: “While I was working on that series I was looking intensely at the American landscape, and that’s when I came across these really strange-looking structures, like a big lagoon, or all these dots that look like microbes. We have factory farming in England, but we don’t have it on that scale. I was just absolutely blown away.”

Here is one from Randall County Feedyard, Amarillo, Texas (2013) 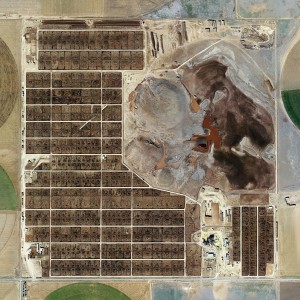 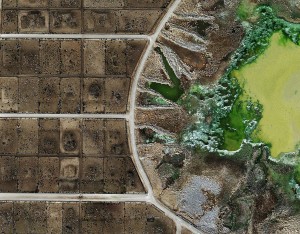 Henner also told Fast Co: “To me, as somebody in the U.K., looking at something [like] the feedlots I was shocked on a very personal level. I think what the feedlots represent is a certain logic about how culture and society have evolved. On one level it’s absolutely terrifying, that this is what we’ve become. They’re not just feedlots. They’re how we are.” 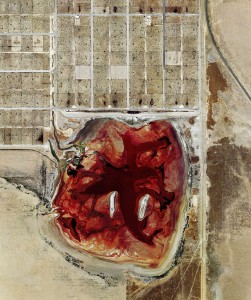 One thought on “Shocking Aerial Photos of Factory Farming Feedlots”