The praying mantis may appear to be a pious, retiring sort of creature. But looks are certainly deceiving as the mantis is a vicious, capable killer. There are many reasons to love a mantis, and these are just a few of our favorites.

Pest control – they eat a LOT of bugs and like live prey so they are great at keeping your garden bug free. A little less fun is the fact that they eat birds too. Yup, hummingbirds, sunbirds warblers, and even European robins are just some of the birds they are able to consume.

When they do catch a bird, they eat the brain first! Not badass enough? According to the New York Times: “In two reported cases, females feasted on birds while copulating with males.”

Praying mantises have been known to eat mice and kill bats which are their natural predators.

They have 3D vision – thanks to their two large eyes and 3 spare simple eyes, they are able to track even the swiftest prey and strike with accuracy. Watch the video below from Newcastle University to see how 3D vision helps them to calculate speed and distance for hunting.

Death spikes – as if lighting speed and accuracy weren’t enough, praying mantises have spikes on their front legs which help to skewer unsuspecting prey. 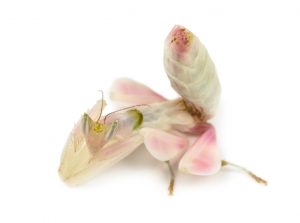 Camo Mantis – even your garden variety mantis is perfectly camouflaged to look like leaves and sticks, but praying mantises come in a wide variety of colors and shapes so that they blend into their surrounding foliage perfectly. 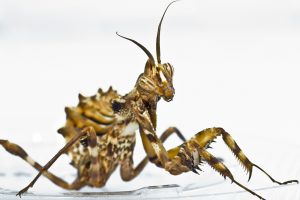 Femme Fatale – we all know that mantis females eat their male companions during mating. They do this as they lay really large clutches of eggs and need the additional nutrients to create all those mantis babies. Since the average mantis mating session lasts three hours, most males should die happy.

You’ve probably seen Mantis cocoons many times. Here is what they look like. 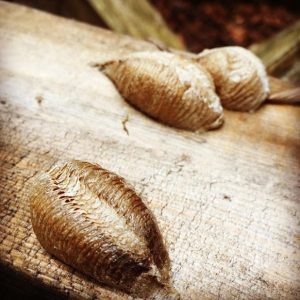