Hot crust pastry is a traditional pie crust that has fallen out of use in recent years. It’s not as soft and flaky as other pie crusts but it is more robust. This means you can make sweet or savory pies without the use of a pie dish and you can make smaller pies that you can take with you for lunch.

In England, hot crust pastry pies called Bedfordshire Clangers would come in long rectangles with a  savory end and sweet end separated by a pastry wall. You could have lunch and dessert in one pie! 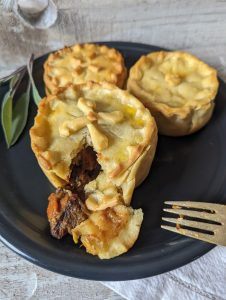 During the 16th century, bored courtiers enjoyed lavish meals. With royal chefs trying to outdo each other, their pies took on exciting forms like manor houses and strange beasts. With hot-water crusts, the pies were able to be free-standing and didn’t need a pie dish. When the strange shapes became passé, one court chef placed live blackbirds into an already baked pie crust. When the pie was opened, the birds escaped to much delight. This started the trend of the ‘surprise pye’ which saw increasingly bizarre things emerging from pies. During the reign of King Charles V, a chef of the Duke of Burgundy created a huge pye replete with musicians and a girl who popped out when the pie was opened.

Here’s the recipe for you!

In a Dutch oven on medium heat, place the olive oil and fry the sausages until browned. Remove and set aside to cool. Add the yellow onion and garlic and fry gently until onions are translucent (about 5 minutes). Slice the sausages into 1-inch pieces. Add garlic, sumac, smoked paprika and cinnamon, sliced sausage and potatoes to the Dutch oven and cook until the potatoes begin to soften (about 5 minutes). Sprinkle the cornstarch over the mixture and stir well. Add the stock. Cook on a medium heat with the lid on for 15 minutes. Remove the lid and cook for 15 minutes uncovered. Remove from the oven and leave to cool for 10 minutes before putting the filling in the pies.

Sift dry ingredients into a bowl and make a well in the center. Place lard and water in a pot over medium heat until lard is melted. Add to dry ingredients and knead until smooth. Roll out the dough to 1/8-inch thick. Cut out circles of dough which you can shape into freestanding pies. Cut smaller circles for pie lids. Fill with the Italian sausage filling and place the lid on. Seal the edges by squeezing the pastry together. Brush on the egg with a pastry brush and bake at 350F for 30 minutes or until golden brown.