As our natural resources dwindle and the mining methods take their toll on the environment, a group of authors look to the skies for solutions. One option is the mining of 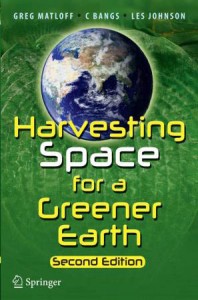 near-Earth-asteroids (NEAs). “Harvesting Space for a Greener Earth” is a collaborative book which looks at the possibilities of mining NEAs in the future. Greenmoxie interviews authors Les Johnson and Greg Matloff and artist C Bangs for their take on the matter.

Climate change has felled many empires and great civilizations in the past, how do you see it affecting our current global power dynamic?

C Bangs: Low-lying countries will have a hard time of it as sea levels rise. Already, the major economic/military powers are vying for control of arctic resources as the ice caps and glaciers retreat. We’re also concerned that the scarcity of resources may provoke wars.  As demand increases and existing, readily obtainable resources are used up, the potential for conflict over who controls the remaining unused resources increases.

With NASA downsizing its space programs, how likely is it that other nations or private companies could mine asteroids?

NASA is not downsizing the space program. Funding levels are roughly constant. What is occurring is an adjustment to the political realities of this time. There are three directors of our space program–the President, Senate, and Congress. Surprise, surprise–they don’t always agree. So NASA is funding several private companies to develop routine access to Low-Earth Orbit (LEO). Simultaneously, NASA is developing its own heavy-lift capability that will allow publically funded expeditions beyond the Moon. Some of the private developments–notably the Dragon spacecraft and Falcon-Heavy of Elon Musk’s Space-X could result in private expeditions beyond the Moon. So it is very likely that public or private expeditions to explore certain near-Earth-asteroids (NEAs) will occur in within the next few decades. Private and public interests may be complimentary in these ventures. For instance, NASA as a political, government-funded organization may be interested by scientific knowledge and a desire to protect the Earth from NEA impacts. Space-X and other private groups may see profit in using asteroids to construct solar-power satellites or for resource mining.

We have the technology to explore and mine asteroids today. We just aren’t doing it. As for how realistic these ambitions may be, just look at the costs. According to the Fortune 500, WalMart sold over $473 billion dollars of merchandise last year. That’s $473 thousand million dollars!  Exxon Mobil sold over $438 billion.  NASA’s budget is $17 billion and only a fraction of it is devoted to exploring asteroids.  Exploring and developing space is expensive, but not prohibitive. And once it is profitable to explore, mine and return resources from asteroids, we won’t be able to stop it from happening.

What do your think about the Supreme Court findings that humans are responsible for climate change? Do you think this will impact the way policy is made?

Greg Matloff: For my Ph.D., I studied under two of the pioneers of climate studies–Jim Hanson of NASA-GISS and Marty Hoffert of NYU. I also knew Carl Sagan at Cornell. One reason that I did not remain in the field of climate studies is my belief that by 1980 or so, all of the applied physics had been done. Jim, Marty and others published in the late 70’s and early 80’s predictions of how climate change would begin to impact our lives in the first decades of 21st century. ALL of their predictions have thus far come true–sea-level rise, stronger storms, species extinction, etc. I hope that the new rulings indicate that the ridiculous debate and the absurdity of political ostriches who will stick their heads in the sand (or somewhere else immune to sunlight) is finally behind us.

Les Johnson: I am troubled by the Supreme Court deciding matter of science.  Science shouldn’t be political.  Science policy is inherently political, but I don’t want lawyers determining scientific truth — even if it advances a political agenda with which I might agree.

What’s the most important take-away for people who read this book?

Things are difficult but not hopeless. If enlightened government can work with progressive industry (as has happened before), then civilization can survive climate change. Unless we think differently, we might not like the future we’re leaving to our children.  It can be one of diminished expectations in the developed world who are living with less (to protect the planet) and hopelessness in the developing world who continue to live with virtually nothing (to protect the planet) OR it can be a prosperous world that allows all its citizens to prosper without further degrading the environment – through the development and use of space resources. The choice is ours. And, in the process, our efforts to save the planet may make us a multi-planet species!

Need some good karma? ‘Like’ us on Facebook and get all the good vibes you can shake a sharp stick at.

2 thoughts on “Harvesting Space for a Greener Earth”