Most people are easy to label; doctor, lawyer, architect, artist. We work within boundaries, within perceptions and constraints outlined by the societies that birthed us. But every now and then a person comes along that defies definition. The unique are unconstrained by the boundaries that govern the rest. They are able to see things from a different perspective. Unbound by trees, they see only forest. We look to these people to provide innovation, creativity and beauty. Paul Raff is one of these rare gems.

How it all Began
Raff’s love of aesthetics started at a young age. He was always interested in shape, light and movement. Wheat fields in the wind, the passing of a train on the prairie impressed themselves upon the young artist. His fascination with form and light was transposed to buildings when he moved from the Montreal heartland into the city. He spent his days spelunking abandoned buildings, elevator shafts, roofs and basements. His fascination with the urban and rural landscape was encouraged by his father, a physician. They shared a desire to see inside of things and figure out how they worked. Not surprisingly, he studied architecture and environmental studies at the University of Waterloo before joining architectural firms in far flung corners of the earth including New York, Barcelona and Hong Kong. His awards are legion, among them the Canadian Green Building Award, the Best of Canada Award, the Ontario Architects Award of Excellence and the Royal Architectural Institute of Canada Lifetime Achievement Award.

Team Effort
From his office, established in 1994, he captains a crazy ship of talent which creates uniquely designed buildings. Raff believes in collaborative architecture and, to that end, has assembled a team of diverse talents. Many disciplines from architecture, development strategy, interior and landscape design to the murky waters of multimedia are represented in an office that is as chaotic as any dynamic system ought to be. Like an organic entity, each expert offers advice on some part of the whole and, when the project is completed it is somehow greater than the sum of its parts. Raff’s team may work together on the flesh and bones of the projects, but it is El Capitano himself who adds the ethereal qualities that turn a house into a work of art. Light is his closest ally and he is able to bend it, seemingly at will, in an approach he likes to call “…the poetics of light.” A Raff building is always surprising, never dull 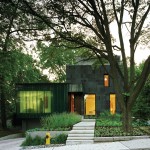 A project Raff is very proud of is Cascade House. The home owners, recent residents of the Arizona desert, were concerned with the lack of light in Canada in the winter months. Raff took up the challenge and designed their living room with two glass walls; one in the back overlooking the gorgeous garden and pool area and one facing the street. Not wanting to block out the light to achieve a sense of privacy, Raff developed an ingenious glass wall. He took 3/4 inch thick jade coloured glass and cut it into 4 inch strips. 475 Strips that are 13 feet high, in fact. These strips were fused with silicone to create a sublime glass facade. Light streams in uninhibited; reflected and refracted to distort images from the street. Colours and shapes change like shimmering water, transforming with the days and seasons in an ever-changing mosaic of modern art. Ironically, this form of glass is the cheapest on the market. “It’s not about utilizing expensive materials, anyone can create a beautiful floor by installing Italian marble — just consider the carbon footprint. It’s about taking everyday materials and using them in innovative ways,” says Raff. “Most architects use glass as though it is transparent, they try to make it invisible, but it’s not.”
Raff tries to use natural light partly as an environmental concern, and partly because the light changing though the course of a day or over the seasons fashions the feel of the house. Although peripheral rooms can be naturally lit, central areas and stairwells are often dark and gloomy. Raff and his team overcame this problem by making the central areas the tallest in the building. The bedroom of Cascade house is the tallest point in the structure. Tall windows permit natural light to enter the bedroom. Set back from the front and side of the house, the angle of the windows prevent passersby from seeing in, while inhabitants have an unobscured view of the world outside their window. The elevation also gives the feeling of being in a treehouse as the windows nestle in the foliage of surrounding trees. Sunshine from the central windows helps to light the stairwell. The banister is made from a translucent plastic which helps to capture and diffuse the light into the downstairs living area. The dazzling stairwell is juxtaposed with a black slate wall rising up through the centre of the house that, although aesthetically stunning, also has a practical function. 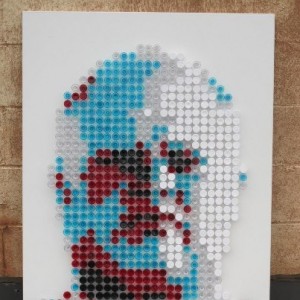 The slate acts as a thermal mass, absorbing heat from the sun during the day and slowly releasing it at night. Cascade house is a passive solar house, which means that it is headed primary by the sun. This passive solar heating is aided by the high performance building envelope. Building envelopes are created with additional insulation in walls, ceilings, roofs and floors. Glazing on windows helps to let sun in during the winter and keep it out in the warmer summer months. This sharply reduces electrical needs and creates a more natural environment for the home owner. Cascade house is a shining example of the move to sustainability. Despite the fact that it covers 4 600 square feet, it costs less than $200 to heat in the coldest winter months. Orienting his buildings in precise directions helps Raff to take full advantage of the light and heat offered by the sun.
When asked about his attitude towards building with the environment in mind, he shrugs; “It’s inherent. It’s an ethical no brainer. Sustainability is a principle for me — it’s not negotiable.” Raff sees sustainability as a responsibility. He feels that he is in a unique position to influence the environmental impact of buildings and the people who occupy them. In addition to practicing in the Paul Raff studio, he also participates in research based collaborations. This affords him unique insight into the sustainability and environmental impact of building materials and methodologies. He is able to imbue his clients with a sense of all that is possible with cutting edge innovation and solutions to the unique challenges the Canadian climate poses.

Each house is tailored to the personalities of its occupants. You don’t just get consulted about a Raff house; you get interviewed. After the initial meeting, the team compiles a lengthy questionnaire to get a feel for the lifestyle and needs of the homeowner. Although they take care of the practicalities that make their houses so exceptionally functional, it’s the artistic flair that really seals the deal. Raff aims to build more than a place for people to live; he wants it to be a home; an artistic extension of who they are as people. The buildings should be more than homes or offices, they should be the places where we live… abundantly.
Tel: +1 416 365 7800 www.paulraffstudio.com