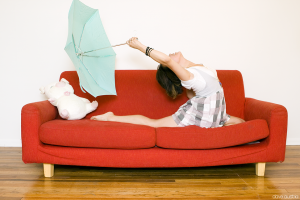 ethers (PBDEs) cause cancer, reduce fertility and cause neurological and developmental problems in children. Not only are the chemicals themselves harmful, but they also produce toxic smoke.

Fire retardants were invented by tobacco companies when domestic fires caused by smoking began to push the government to demand safer cigarettes. Big tobacco managed to convince them that it wasn’t the cigarettes, but rather the homes themselves that were the real danger.

This provided a whole new market for chemical companies (major shareholders? Big tobacco of course!) which is so lucrative, that they have systematically covered up evidence that fire retardants don’t stop fires and that they are harmful to humans.

In 2011, lawmakers were considering a ban on fire retardants until Dr. David Heimbach, an expert in treating burns, told a heart-wrenching story of a baby, just 7-weeks old, who had burned to death when a candle fell over and set her crib on fire; “Half of her body was severely burned. She ultimately died after about three weeks of pain and misery in the hospital,” he said.

Dr. Heimbach claimed that, had the crib been doused with fire retardants, the baby would have survived. Dr. Heimbach had told the story before, and would go on to tell the story (or some version of it) at hearings wherever fire retardants were being reviewed. The baby was 9-weeks old when he told the story to lawmakers in California in 2009, and 6-weeks old when he spoke to Alaskan legislators in 2010. But the story isn’t true; there is no record of Dr. Heimbach ever having treated an infant burn victim and he was paid for his testimony at these trials by none other than Albemarle, ICL Industrial Products, and Chemtura; the largest manufacturers of flame retardants.

Enough said. If you have a baby, you may want to investigate the kinds of chemicals that are present in their cribs and bedding and explore green living options instead.

One thought on “Is your Couch Trying to Kill You?”