Do you want your mind blown? Then read on brave adventurer…

Nature is often odd, sometimes strange and regularly downright weird. Here are some freaky natural phenomenon some which can be explained and some of which, well….

These ice spikes grow on glaciers and are named for their resemblance to processions of hooded monks. Penitentes can grow up to 5 meters and are formed when refracted light melts glacial snow.

It’s no biggie… it rains fish in Yoro, Honduras so often, they have been having a fish rain festival since 1997. The 6 to 8 inch fish are the blind, cave-dwelling kind (origin unknown) that end up on the ground after an hour or two of heavy rains. The phenomenon occurs about twice a year and locals fry up the fish to eat. Raining fish may be odd, but it is preferable to Argentina’s… 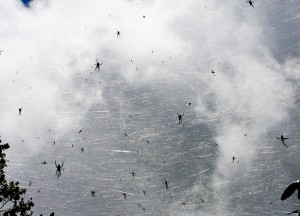 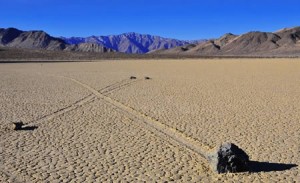 The packed-mud floor of Death Valely plays host to a truly strange phenomenon. Rocks weighing hundreds of pounds shimmy across the desert floor under their own volition. Some scientists have theorized that strong winds and ice nudge the stones along, but the strong winds necessary to move the larger stones simply do not occur in Death Valley. Also, stones that are next to each other one day will move in disparate directions overnight and at different rates. 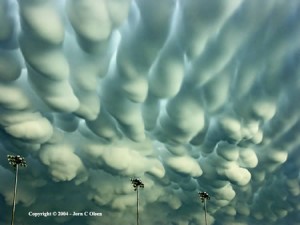 Mammatus Clouds
The mammatocumulus, or ‘breast’ clouds, consist of ice. Their portentous misdemeanor is not misplaced; they harbour ominous thunderstorms.

Want more good karma than you can poke a sharp stick at? Then ‘like’ us on Facebook!

One thought on “Freaks of Nature Thursdays: Weird Weather”