A new study, by Self Financial, investigates the average running costs of electric and gas vehicles in each state:

If you’re considering a switch to an electric vehicle, consider recycling your old car and find out the car scrap price for your vehicle.

The car market is dominated by gas, but each year EVs become more popular, currently occupying about 2% of market share. Some states have adopted the technology quicker than others, with California reaching far above the national average at 8%.

A key question many have when looking at buying an electric vehicle is how much it will cost; especially when compared against gas alternatives. To help buyers, Self Financial has broken down and compared the running costs of electric and non-electric vehicles in each state to find out the true price of going green. 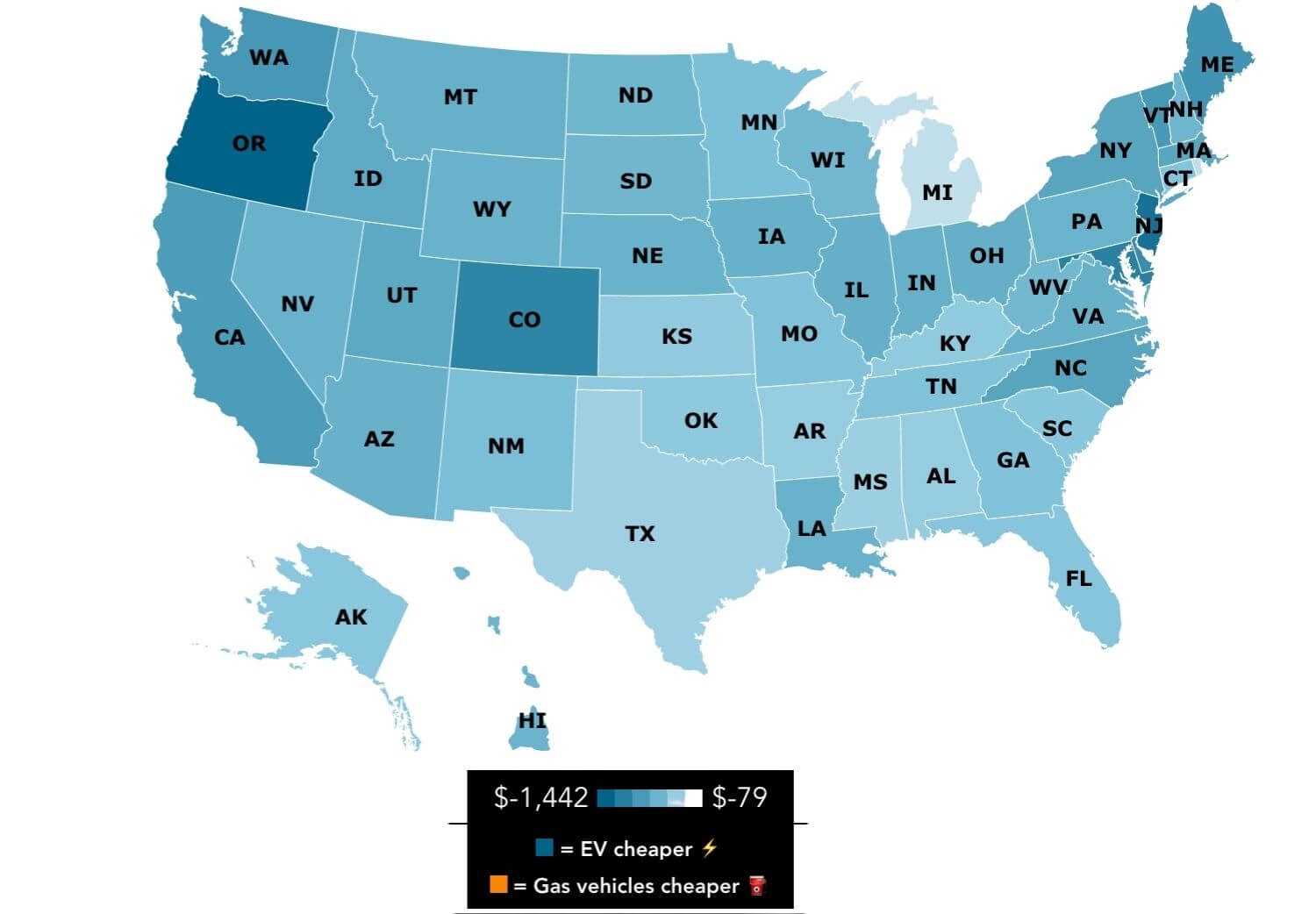 These annual costs don’t take into account the purchase cost of the vehicle itself and are purely the ‘running’ costs annually.

When the purchase cost was factored in, we found that on average gas vehicles are $1,454 cheaper per year, costing an average of $7,952, compared to electric vehicles which cost $9,406.

This was not the case when the Tesla Model 3 was compared against the most-popular premium gas car in the US, which costs a similar amount to purchase, the BMW 3 Series. 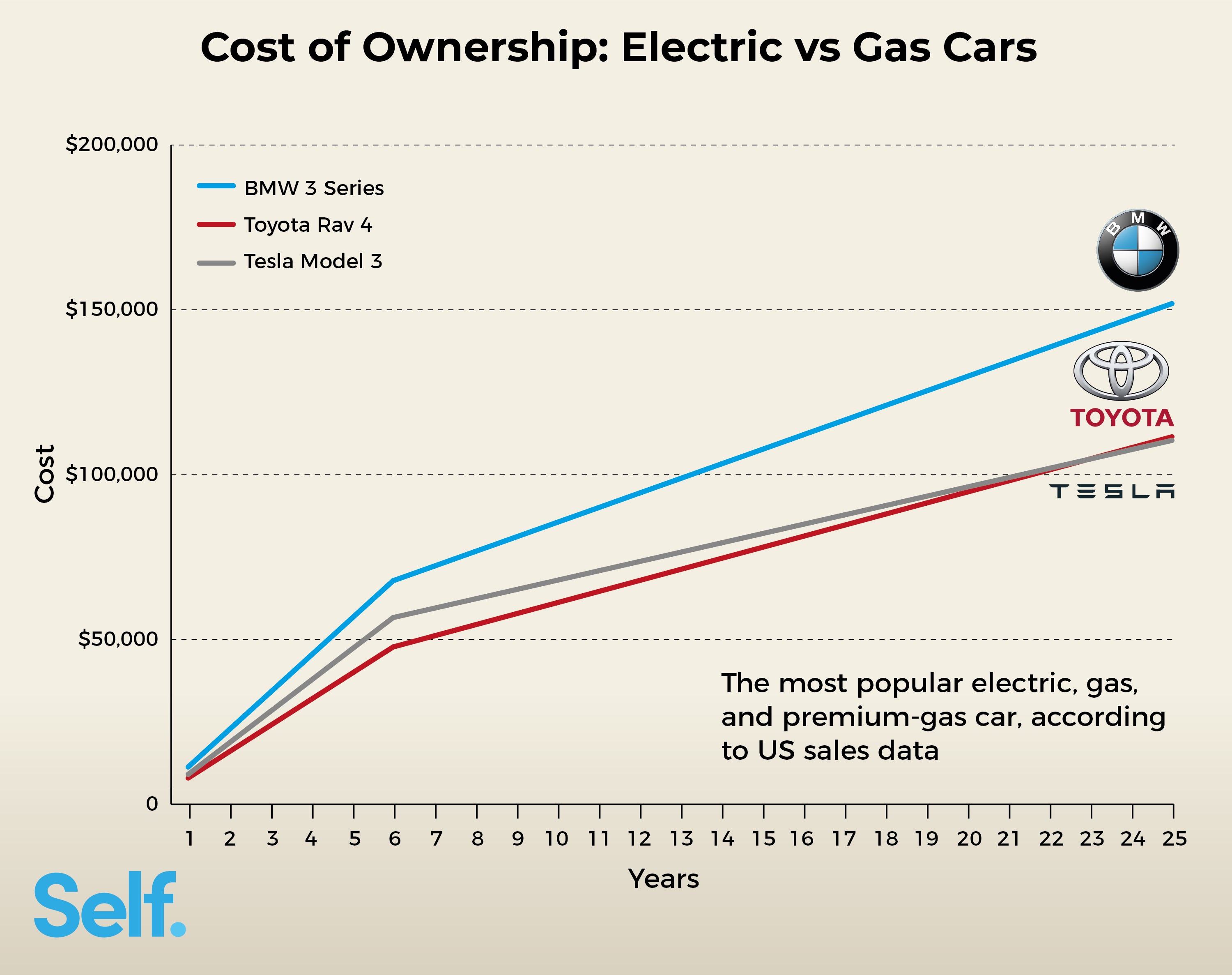 Many states across the nation have introduced various incentive programmes. In 21 of the 50 US states, there are cash, parking and rebate incentives to buy an electric vehicle.

While many of these incentives come with stipulations and clauses, our study found that buyers could knock off as much as $700 from their annual purchase and running costs by using local incentives.

In terms of the individual costs of running, on average we found that nationally it costs as little as $0.03 per mile to fuel an electric vehicle. In comparison to the 3 cent cost of charging your vehicle, the national average cost to fuel a gas vehicle is double at $0.06 per mile.

Although fuel costs are the most ‘present’ cost on people’s minds, insurance and tax and also see running costs creep up.

Without taking into account incentives and subsidies, taxes on electric vehicles are typically more expensive than gas cars; costing an average of $183 more per year. Across the states, the average cost of taxes for a gas car is $321 a year, compared to $504 for electric vehicles.

Interestingly, our study found that insurance of electric vehicles is on average $442 more expensive than their gas equivalents, with the average annual insurance cost for a gas vehicle at $1,232, compared to $1,674 per year for their greener counterparts.

Lauren Bringle, Accredited Financial Counselor, at Self Financial said this:

“As electric vehicles become more popular, people will be looking into whether they’re worth it; our data suggests they are in terms of running costs, but it’s typically going to be more expensive in the first instance when buying the car. If you’re looking to buy, remember, the longer your auto loan term, the more it will typically cost you. This is because interest costs on longer loans (more than 5 years) are much higher, even if you’ve got a healthy credit score.

Longer loans may also mean you’re “upside-down” on your loan – meaning you owe more on the loan than the vehicle is worth – which could come with even more costs, such as GAP insurance. The risk of upside-down car loans is that if the car gets totalled or you sell it, you may still have to pay money on the vehicle.”

If you decide you want to go electric, you’ll most likely have another vehicle to get rid of. If you want to sell your car in an eco-friendly manner you can use a service that recycles cars. For example, in Sacramento you can work with Junk That Car to sell your old car. They make it quick and recycle cars to help the environment.

To understand one of the areas where electric vehicles are more expensive, Jonathan Hale, personal injury attorney at Red Rock Injury Law commented,

“Electric vehicles only account for a small number of cars on the road. Because EVs are still rare, the cost of repair is significantly higher than gasoline vehicles. A hybrid electric vehicle can be even more to repair because of the complexity of its internal systems.

The increased cost of repair increases the likelihood of being declared a total loss in a collision. Processing a total loss is more expensive for an insurance company because it is more involved than repairing a vehicle at an autobody shop.”

To reduce these costs Jonathan suggests: